Mobile phones have become the most favored toy for children these days. Parents have realized to their dismay that children do not get tired of this toy, unlike many other toys. Children can be engaged for any length of time with this wonderful instrument, with its fleeting images and exciting sequences. Parents also start admiring their kids for their concentration, and all the different operations they can perform on the phone, which they themselves often times cannot. Some of them even believe that this is a blessing, a real magical toy.

Children of the present generation are digital natives. They are born into the digital world and they take to these gadgets like fish to water. They start exploring the tiny machine, and soon learn its manifold operations and possibilities. Parents are amused, amazed and excited about the little genius’ many discoveries. They sometimes regale their guests and relative with the various technological feats of their kids. 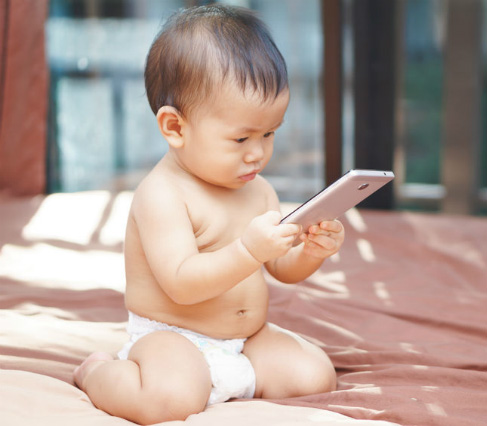 So much is good news, but then there is bad news. Lots of research around the globe has established that mobile phones are most harmful to children. The radio-active rays emitted by the phone can damage the brains of children. It can even produce brain tumors, sometimes cancerous ones. Recently a parliamentarian from Kerala put out a message. He visited the RCC (Regional Cancer Centre) in Thiruvananthapuram. A pediatrician known to him invited him to his chamber and asked him to observe what would be going on, for half an hour. Some 10 parents came with kids mostly less than 2 years old. All of them had tumors in their heads. The doctor discussed the history of each child with its parents, and nearly all of them confessed that they used to give mobile phones to their kids to play with. The doctor later explained to the MP that most of these tumors were cancerous and the parents were solely responsible for this tragic situation.

The doctor requested the MP to give out a message to the public about what he witnessed. He promptly made a fervent plea to parents to stop giving these electronic gadgets to children. Parents and caretakers of children introduce the mobile phone to children as a strategy to keep children engaged. It is true that children will not bother their parents or other caretakers and so they are tempted to resort to this strategy little realizing that they are willfully exposing their children to a deadly disease. In other words parents are unwittingly pushing their kids to the jaws of a calamity. Worse, they have to live with guilt the rest of their own lives. Is this not preventable?

Parents need to know the facts. First of all, it’s not a false alarm. It’s a scientifically proven finding. See what one such study says:

“This is because of the closer proximity of the source of radiation to the brain of kids (they have thinner tissues and bones than adults).” It can affect their brain in different ways. One of them is tumour which can turn cancerous.

Sleep disruption is yet another fall-out. Engrossed in the visual images on the mobile phone, children do not go to sleep when they should. Sleep depravity can also cause brain damage.

Children will also grow fond of various sites. Gradually they get exposed to sites inappropriate to their age. This may happen without the parents’ knowledge or permission.

Aggressive behaviour is seen in some kids who are addicted to mobile phones. Recently I witnessed a situation when a child was hitting on his own cheek because his father refused to give him the smart phone.

Single children with no siblings to play with are more likely to fall back upon this ‘adopted sibling’ called the cell-phone. Parents who are wilfully limiting the family to a single child are perhaps not being fair to the child, by denying it an opportunity to grow up with a sibling which is itself a great learning experience. Single children often will not have the same amount of resilience as others because they live in an exclusive environment of their own creation, with no need for any adjustment. Single children of nuclear families are thus more prone to mobile phone addiction than those with siblings or those in joint families.

That’s to say it can cause not only physical harm, but also mental disorders of various kinds. Parents cannot disregard theses alarm bells. It’s surprising and even shocking to see parents not paying heed to warnings coming from different sources these days.

Parents may at least make sure of the following whenever children are given such devices or they are in close proximity.

The above warnings are loud and clear. “Whoever has ears, let them hear”.